What a crazy night. After the 42C heat of the last couple of days, the rains finally broke in the wee hours of the morning. I’ve never been deafened by so much heavy rain in my life and it was fantastic to lay in bed and listen to. If maneuvering with cracked ribs wasn’t so exhausting, I’d have sprung out of bed and stayed up all night, mesmerized.

Someone forgot to tell the morning call that we were on the later boat, so there ended up being a 4:30am holler. Drifted back to sleep for 45 minutes before finally getting up and ready to get out. I’m sad at having to leave but in a way glad that it’s not longer, as the humidity has meant that clothing won’t dry and only being able to sleep in a set position with the cracked ribs, and in a pool of sweat, made things a lot more uncomfortable and difficult than they should have been.

After breakfast it was a short hike in the now light drizzle, back to the boat, and a speedy journey that took one hour less than the time heading in, three days ago. Going at the later time to our original group meant there were a lot more people and the bus back to the lodge was packed solid. With some reggae blasting, brown pooled bumpy roads and plenty of palm trees swaying, the trip back could have easily been in Jamaica and the ambience of it all was very enjoyable.

Didn’t really have the time to visit any of Puerto Maldonado but we did drive through it on an alternate way back to the lodge, so that will suffice for now. By time the baggage was checked in, there was still a couple of hours to wait for the flight. The timing here is odd, as the flight (as with the incoming) is supposed to be one hour to Cusco but ends up being 35 minutes. The rest of the time, seems to be made up with boarding and having a tow truck pull the A319 Airbus out from the gate. We weren’t due to stop in Cusco, but I guess it’s a combination drop-off/pick-up stop and refuel. Got to sit for 45 minutes on the plane during the process, before finally taking off and heading to Lima.

I knew it was going to be cutting it fine with 45 minutes between flights in Lima when the flight was booked, but there wasn’t much else in the way of options at the time. The plane eventualy arrived fifteen minutes late and it was literally a mad dash to get off, go through the baggage claim exit and back to departures, so we could pay the aiport tax to fly out. Why they don’t have the option to come off the plane and walk to the departure gates without leaving the area for internal flights, I don’t know. It’s a hassle and unessessary. Thankfully the bags were checked right through to Chiclayo, otherwise the flight would have been missed.  Finally made it to the gate, ten minutes before take-off.

Just an hours’ flight North and it was arrival in Chiclayo. Big relief when the bags had made it, too, and that there was also some daylight left to get bearings and validate the taxi drivers. There’s a board in the exit area with set prices on it, Lambayeque being 25 soles – this was almost double what the tour books had said, so be aware if visiting here (They don’t appear to have an ATM, either).

Sunday night appears to be party night in Chiclayo and the streets were packed, with the music blaring out. It’s more relaxing to be sat in a car passing through and enjoying a bit of people-watching from a comfortable distance. After about twenty minutes, we were outside the hotel. A brief greeting later and the eyes are treated to some very fine living areas and well-tended plants. Unfortunately for me, the night staff didn’t comprehend any English or attempts at translation and when responding with ‘no comprende espanol’, they just kept rattling off conversation in Spanish like there’s no tomorrow. As luck would have it, there was one other occupant of the hotel this evening, which was a girl who spoke great English. We were able to get some basic info and I was able to get across that I’d like the passport copied for the record now, rather than them leave it on the front desk all night to hand back ‘later’. I’m ok trying to translate basic words slow but I don’t think this guy got it, as he just barely stopped talking to breathe and didn’t seem interested in sticking to the key points. Despite this, he opened up a wonderful room, with a balcony overlooking the walled pool and the church a couple of blocks down. After he left, all I wanted to do was sleep and get out of the still damp clothing. The water was cold, so I’m going to have to see if it’s a set-time thing but I did manage to get a basic wash and a good shave, before getting in to bed and passing out within minutes. 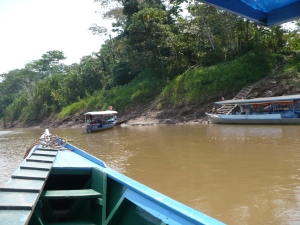 Getting a little more sleep is certainly helping with getting through the day with this pain in the side, which means I can take part in more activities. Still, I am unable to hike too far without getting exhausted, so opted out of the morning walk to the nearby medicinal plants. I’m already pushing myself harder than I should be and I don’t want to hold up the group from getting the most out of their time here.

It was nice to sit and read with just about everybody out of the lodge and I loaned the barman the netbook, so he could talk to his wife who he hasn’t seen for some time, and totally relaxed with a morning breeze on my face. After heading back to the room to freshen up a little, I came back to find a few people from another group in the front area, with one guy trying to take pictures of some large grasshopper type thing on his hand. It was pretty big with the body alone, a bit larger than a couple of my biggest fingers. It obviously didn’t like his photographic attempts as it bit him, forcing him to shake it off his hand, where it dropped to the side of the chair, where it stayed for most of the remainder of the morning.

As our own group returned, Elder handed over some cut up bits of wood to chew and try, before everyone had a good laugh. The flavour was like battery acid and started to make the mouth a bit numb – turned out it’s the equivalent of novacaine, but from a tree! Elder also brought back a concotion of tree sap that is used for fixing cracked bones. He made up a poultice and bandaged me up with it all; within an hour, I was able to move more freely, so something’s working.

My rib damage means I can’t do the tree climb I’d signed up for but instead, I get to record a video of B taking her turn. I’m pretty upset that I didn’t get to have a go but there will be other times, I’m sure. She made a great effort up a tree of around 110ft and seemed to enjoy the experience immensely. Soon after getting back from the tree climb, it was time to head to the canopy tower, for a view above the trees and the promise of a good Sunset and the occasional wildlife.

The walk to the tower is pretty short and along the way we had some explanaitions about rubber trees and the use of both sustainable and unsustainable farming of them, as well as seeing how the rubber is extracted. I never expected so many bugs at the canopy tower, and could stay longer than ten minutes at the top – the heat from the Sun was almost too much at that point. Flies were crawling in my eyes, up my nose and down my shirt, even though I had a ton of Deet on me; it was time to head to the bottom and get away from the swarm. On the way down, I encountered the biggest wasp-type thing I’ve ever seen and I’ll have to check my images later to clarify the species.

Back at the lodge and it was time to organise the details for leaving in the morning. Looks like we’re not all taking the same boat, so it was time to say goodbye to the group and wish them well. I wish I’d not been so crippled, so as to enjoy more time with everyone, but I’m glad we all had fun. 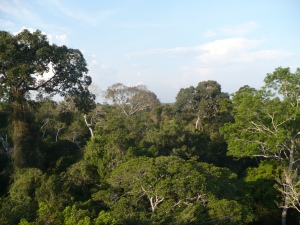 A little more rested this morning but sweating from the off. The slash and burn method of making way for new forest growth, causes more heat to be reflected back and increases temperatures by about 10C. We were told it was around 42C yesterday and likely to be the same today.

After breakfast, the morning hike was about an hour to the nearby Clay Lick, to view the McCaws and various parakeets, gathering together. They must have been just out of view because the sound was fantastic, but we could only see several birds from a distance. Still quite the experience, though.  My side was getting more painful at this point and after having lunch, I opted out of the walk to the lake and the opportunity of swimming. Swimming sounded so perfect but I can’t do it one-handed.

A bit more rested and cooler in the evening, it was time for a walk to the boat to search for Caimen. On the hike back down to the dock, it was a great chance to view a large number of spiders and scorpions. One of the scorpions glows under UV light, which I’d seen on TV but things like that are great to see in the wild. Caimen are much smaller than I had envisaged. The young were everywhere and only a couple of adults were spotted both in and out of the water. After searching in both directions on the river for a while, the engine was cut and all lights were extinguished, as we had five minutes silence to enjoy the natural night of the jungle and the sounds eminating from it. The sky is full of stars and lightening is way off on the horizon – I wish we never had to leave.

On the hike back to the lodge, two of the group had stopped to take pictures of something large on a tree at just above head height. Getting closer, it turned out to be a spider, around the size of the average hand, just stopped there. Elder, our guide, spoke quite matter-of-factly, that it was known as the wandering spider, a jumping spider that when it attacks, is as ferocious as a dog. I’m still fascinated seeing something this close but after the explanation, I’m real glad it wasn’t my face closest to it.

A really pleasant 14.3M/23Km hike today, to check in on my Camino legs (still powering me through with no problems 😁) A little noisier than I prefer as it parallels the 98, but still a lovely meditative walk. #FortFraserTrail