Hostel Colonial has a good rating from the guide book I have but upon arrival, it’s pretty lacking. There’s major construction going on in the middle of the building and the rooms are small and old, in a grubby way. As check-in wasn’t for a couple of hours, we were put in a holding room, which had plywood walls and camp beds.

With a bit of time free until our afternoon tour and room change, we tried out some of the highly recommended food in the restaurant next door. The food is good (but nothing to rave about) and beats snacking on junk food. After catching up with Email online, we managed to get moved to the correct room. With barely enough space to fit the bed in, hard scratchy blankets and rattling windows, it’s quite a disappointment. Considering we’ve been to far poorer areas such as Nazca and had far superior accomodation for the price, I expected much more.

Trujillo is the most ‘western’ city on this trip so far, with standard looking high-streets and more informal dress. There are still fleets of taxis forever honking but you feel less of a tourist here and don’t stand out as much.

The afternoon tour was excellent and cheap, covering two good archeological sites, a couple of mediocre reference museums and a trip to Huanchaco beach. The two main sites were the Dragon/Rainbow temple, and Chan Chan. The Chimu tribes of the time encompassed a vast area of which the grandness and scale of the buildings can be experienced, at the sandy remains of the Chan Chan ruins.

After the last stop of the four hour tour for a short peaceful stroll along Huanchaco beach, it was back to the hotel and grab some food before hitting the hay. It’s not going to be fun, trying to sleep on this hard, itchy bed. 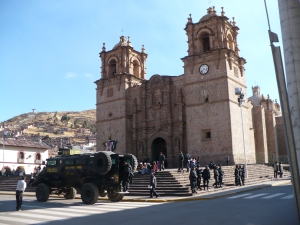 Arrived only about an hour late in Puno, via Juliaca. The guidebook was bang on this time when talking about Juliaca, that it’s just a big junction on the way to somewhere else. Looking more like Nazca but with American sized streets, this town houses the nearest airport to Puno and that’s about it. It was great to see some traditional dress in the streets but the living conditions were not such a welcome.

Puno is such a claustrophobic collection of small buildings and steep streets, like a mini San Francisco. Rubble in random places, buildings barely patched and holding together but still all smiles and a thriving community. Soon as we got off the bus, taxi drivers were waving for business and we hopped on for a 3 soles ride around town to the hotel. The driver was trying to explain the local area in Spanish but managed to break a few key words of English to help us along.

Again, the streets are narrow and the drivers fast and erratic but it all flows like water, seeming held together by some invisible thought process that makes everyone aware. The hotel (Qelqatani) is pretty awesome and would compare to a 4 star back home. It’s rated a 3 star here and covers everything you would need under one roof.

While checking in, we were offered some Coca tea. As the Inca Trail hike will be supplying us with an endless amount of the plant that makes cocaine, I figured I’d better try it out to see if my body rejected it. Thankfully no bad reactions so far and the taste is somewhat similar to a green tea.

After settling in, it was time for a quick walk around the Plaza before it got too dark. As I discovered in Arequipa, there’s no shortage of churches and small cathedrals from colonial imposition but still, they are some wonderful buildings. Just across the road from the cathedral, there was some kind of protest going on. Wanting to avoid getting mixed up in any local arguments, we made a diversion and headed back to the hotel.

Getting pretty hungry by this time and it was dark outside, so the concensus was to eat in the hotel restaurant for tonight, as we weren’t familiar enough with the area. The menu had some great looking meals with Kingfish, Trout and Alpaca on the list, all of which are local items I really wanted to try. Bizarrely, all items except the few Euro dishes and a Pisco sour, were not available.

I ended up ordering a dry and bland Chicken Cordon Bleu – seriously, how can you screw this up? You knew it was going to be bad, when the food arrived with eyes and a smiley face arrangement. For that sole reason, the hotel loses most of the kudos I had given it, for its effort to cater to people who wanted something clean and classy, amongst the dirt and poverty of Puno. Maybe in that statement I’m missing the point – I should have opted for a cheaper place that was run by locals, and had a much better experience.

It became obvious after the past couple of arrangements for the Peru trip, that the country has an advertised tourist agenda on-line and attempting to divert from that goes initially ignored, or there’s just never any response. Arequipa was to be no exception.

Arequipa has some notable tourist attractions in the main city and two locations I just had to visit. Both the Juanita exhibit and the Santa Catalina Monastery are within walking distance of our hotel (La Casa de mi Abuela) and will be a perfect way to spend one of our days there. As we didn’t really have the luxury of spending more than a couple of days here, the usual tour of the Colca Canyon was bypassed, as it required a couple of days at least, to get a decent sightseeing tour. Something that caught my eye while checking out a few other websites, was a smaller day tour to a place known as the Sumbay Caves. The tour itself is the same across the websites with only the price differing so I’m assuming, the private tour is from the same operator. I tried to book through the hotel initially, just to see if we could get a better deal or at least a recommendation but the contact details they gave me, failed to respond for a few weeks, then when they did respond, the cost was almost double of what other operators were charging.

Scouring the net to find other operators for this tour, I eventually settled on Peru Adventures Tours who were only a few dollars more expensive than other guides. These were the first and only operators that didn’t give me a runaround with other options, so after checking Trip Advisor to see if there were any warning alarms about this particular group, I made the reservation.

I can only assume that the tour itself is not a frequent visit, which is why it’s a little difficult to book. I’m sure that I could have grabbed a guide when I arrived in the town and had a cheap private tour but this was something I wanted planned in advance. I can only hope that it’s an overlooked gem but nevertheless, it will be a great day out to see some Peruvian terrain, wildlife and volcanoes.

The reference earlier to the tourist agenda, was applicable to all the other operators I contacted, who sent me back a price for the itinerary from Lima to Arequipa and then a few days in the Colca Canyon, when all I asked for was a city tour and Sumbay Caves tour. This is despite my very straightforward Email, detailing the exact locations I wanted to visit. Even after responding with only wanting the Sumbay Caves, a couple of replies tried to re-price the Colca Canyon, without the transport from Lima. It can drive one a little crazy with the back-and-forth of the whole affair but I re-worded my Email, and made a list of places I didn’t want to see under the ones I did – this seemed to do the trick. Coming from a tourist nation, I’m just used to things being easy to arrange, and often forget than I’m communicating directly with companies that sometimes don’t speak much English, or even have a well developed infrastructure. That’s my own failing and a perception I’ll need to quickly change; I’m the first to state that going to another country requires you to do everything to make yourself behave as a local, and not expect the locals to engage on your terms.