Images from my September North to South rim day hike, of the Grand Canyon

Arizona is one of those states that you can’t really quantify in words. It’s an experience that will lead you away from the freeways into a brown burned carving of abstract, carpeted with waving sand and rivers and, when you sit still and listen for long enough, a psychedelia of greens and purples. Of all the 49 states I’ve been to so far, it still attends the unflinching response when asked of my favorite place to visit and here I find myself again, sighing a resentment to leave.

Despite almost five continuous years of descent into the Grand Canyon, this was my first visit to the North Rim. The sheer emptiness, presumably attributed to the somewhat relative remoteness of the area, is an absolute pleasure. Nothing washes out oneness with nature than the babbling turmoil of sightseers on cell phones, elbowing out the competition for the same shot they’ve seen in National Geographic. I often feel saddened by such ventures because it misses the point entirely of these wonders; sit still and witness an element of insignificance among the grandeur of life – the mind will take the perfect photograph that will last forever. As it turns out, the majority of the visitors this particular weekend were residing in the lodge; a theater of glass that affords fireside views of the stone chameleon, without any effort, bar the raising of a cocktail glass. I took numerous brief ventures inside to escape the cold winds until the Sun’s voice faded to a whisper and, as the last embers of orange fused with the horizon, headed back to the campsite for the night.

The following day the journey was continued to Page, across the Vermillion Cliffs Highway; a vast landing strip of some unimaginable sized craft, cupped with salmon sidings that trace a path to forever. Passing the Cliff Dwellers and the Navajo Bridge, the Sun again stoked its fires as I decelerated into Page, just in time for breakfast.

Ever since seeing my first images of slot canyons, I’d wanted to visit Antelope Canyon. In recent years during a meditation session, there was even a visualization of creating pottery with the red sands of these desert veins. I made a move on the opportunity and fortune favored my plans, when some people had dropped out of the longer photography tour, freeing up space for my curiosity to be satiated. The canyon itself isn’t far outside of Page, just 10 minutes in fact to get to the head of the off-road trail leading to the entrance and a further 15 minutes of the tour guide repeatedly snapping the wheel to escape biting pits of sand, as he forced our vehicle through a beige lunar landscape. Once at the entrance, it was already evident that the wind would be an issue, exhaling microscopic bullets at exposed skin and, more importantly, unprotected camera equipment. I’m still trying to get my camera functioning fully, over a week later.

The upper canyon is easy money for the Navajo nation and never more so blatant by the crushing slaughterhouse of tourists. Nate, the tour guide, did go out of his way to create space so shots weren’t polluted with people, often to the contempt of the other guides who were trying to exit their shorter tours as quick as possible. It’s hard to have a spiritual experience with this amount of negative energy flowing through a smirk in the landscape but I was not disappointed; the spaces that Nate did create were enough to take a shot, step back and inhale a few purposeful thoughts. If nothing else, it has inspired me to explore more slot canyons and find a true meditation area in which I can sit undisturbed for hours.

Nate was full of information about other locations to visit, the most intriguing of which were rocks “shaped like mushrooms” Limited for time and confused at his rapid-fire directions (akin to “go here, pass here, left, right, 2 lefts, a few miles here and turn”) I’d already made a decision and headed back out of Page, toward Horseshoe Bend.

Horseshoe Bend – or King Bend as it is locally known is an arcing diversion of the Colorado river that grasps for route 89, falling just short enough to sandwich a free parking area and a burning, exposed walk to its lip. There is certainly nothing somnambular about this incision into the bones of the landscape; the haunted shadows and choleric angles only serve to dissolve the upper landscape, leaving a perspective that nothing except an entry point to the underworld exists. Time was consuming too much of the day at this point and so the journey continued South, to the Grand Canyon’s more populous rim.

The South Rim is, as always, a tsunami of strangers that come to witness a sunrise or sunset at the canyon rim, just to seal an ambiguous statement that “Yes, we’ve ‘done’ the Grand Canyon”. Spontaneously evacuating the rim as soon as the spectacle is over, they fade toward various exhibitions, the Sun’s light show over the canyon already lost conversation. With the dispersion of the human element, the canyon becomes your own and the tranquility and utter darkness are both liberating and suffocating. 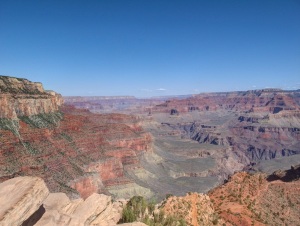 The following morning, I decided on a new path to tread – the South Kaibab trail. After grinding my heels on Bright Angel for the last few years, the full extent of South Kaibab to the river and back is my new challenge but for this weekend, with companion in tow, we were only to venture three quarters of its spine. Little to no shade afford this route some of the greatest exposed views in the canyon, none more so than “Ooh-aah point” (allegedly named for the reaction it gives). Passing here the gradual descent connects Cedar Ridge and Skeleton Point, with the first glimpse of the Colorado, tearing through the floor of the canyon with the grace and determination of a hungry snake.

There were so many other locations worthy of a mention on this trip; Wupatki, Sedona, Marble Canyon and Montezuma’s Castle. Many I make a point of returning to whenever I’m in this region and I should write about them at some point. For now, I suggest you follow my lead and just visit them. Maybe then you’ll reach the same conclusions about Arizona; beyond words and something only for the mind.

Bright Angel and Kaibab will resonate during conversations of best known trails within the Grand Canyon. Echoing tides of tourists that white-cap respective trailheads, also endears Bright Angel as the stormiest sea, until you submerge yourself toward the lower canyon and the crowds become muted from existence. The majority of these canyon-gazers hit an invisible wall at the mile-and-a-half rest area, psychologically or physically beaten as their brain finally interprets the expanse of a crack in the world, that doesn’t look so hard when you’re comfortable at the top. Technically, it’s not difficult to hike the canyon if you do it right. Heading down in the late morning crosses swords with a blazing sun, which torturously squeezes the thermometer levels as fast as your backyard gas grill. Heat, dust, dehydration, lack of shade when it matters, all suffered accusations as I barely made it out of the canyon on my first hike, three years ago. The uncomfortable truth of it was that I just didn’t respect the surroundings and let my ego dance around assumed skill and fitness. People die here and I seriously concerned myself with being another statistical trophy of nature, if I sat for longer than a minute and let sleep suffocate me. I’m still here, and more in love with the canyon than ever before.

The trail spoke to me that day and changed how I thought of myself. It changed how I prepared for this kind of trip and also how I engage descents and summits. Pre-dawn movement around 3am or 4am usually powers my legs back over the rim, long before noon threatens to transform delicate skin to a resemblance of spit-roast. Circumstance had this year’s descent later at 5:30am to allow my travel partner to view the South Rim sunrise and by time Indian Garden was passed, the sun already arched for the tops of our heads and fueled the dusty heat to 85F. Minimal groups of hikers heading to Plateau Point had long since passed my accommodating pace, not interested in viewing the scenery but instead talking about school, life back home and everything you come here to forget. Two groups of girls were in the smallest of t-shirts, revealing shorts and no other protection. Some people had no food or water and I develop a reflex concern, over the lack of respect shown to the terrain. I still wonder if they made it home without any damage to their body and whether they even conceive of the wonderland they’ve passed through. The mule train is taking respite and their overweight cargo sit in the shade, shoveling snacks into gaping mouths, expiring complaints of heat and tiredness with every other breath. I want to confront them, to demand they give something of themselves to the trail, before they can ever earn the right to bemoan it’s often harsh ecosystem. I want to make them stare at the aged mules, who have long lost their will to imprisonment and routine of hauling paying clients. Let me witness the smallest whisper of care, to know that I’m unjustified in my outrage. I look into the vacant eyes of the darkest mule and start to lose my anger; it looks like a smile is contorted to its long face and I understand. Empty your mind, let it all go and the canyon will free you.

I’m distracted by random pieces of garbage tossed into the cacti and carefully recover the items to place in my backpack. My mind is starting to empty again and gains communion with the path. Within those thoughts, I’m introduced to native tribes that once used this area as a source of living, not entertainment and picture silhouettes, quietly saddened in disapproval of invaders, who blindly pass through an abundance of spiritual growth. I want to ask some of these hikers why they’re here, why they took all the trouble and preparation to get to the trail, only to treat it as a business commute, shuttering senses until safely home.

Nearing the top, the crowds are again prevalent, some carrying babies, a dog in a bag, street shoes, black sweaters and layers of makeup; I’m never sure whether to laugh at the lack of intelligence, or be concerned over which one would be the next casualty. Attitudes change and people become less willing to interact or pass pleasantries – hikers lower on the trail will nearly always make eye contact along with generous words and a look, which communicates an understanding of what trails like this are for; they honestly and wholeheartedly get it. 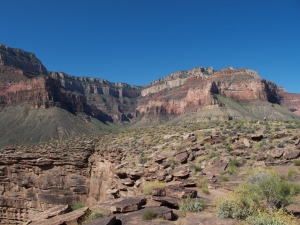 Bright Angel is like a drug, revealing enlightenment for those who engage with its internal conversation. I’m still addicted and still in love, yet it’s not an adolescent crush or childhood needs from a parent, it’s a bi-directional transaction accepted by each party on the day they joined in mutual respect. Leave some piece of your heart and spirit within the canyon and it will forever leave something within you.